Cat: One hell of a nice animal…..frequently mistaken for a meatloaf.
Unknown

The smallest feline is a masterpiece.
Leonardo Da Vinci

Cats don’t caress us – they caress themselves on us.
Rivarol

When food mysteriously goes
Chances are that kitty knows
More than she leads you to suppose.
Louise Dolby.

Dogs come when they are called; cats take a message and get back to you.
Missy Dizizk and Mary Bly.

A sleeping cat is ever alert.
Fred Scwab.

There’s no dealing with a cat who knows you’re awake.
Brad Solomon

Ignorant people think it’s the noise which fighting cats make that is so aggravating, but it ain’t so; it’s the sickening grammar they use.
Mark Twain

It is impossible to keep a straight face in the presence of one or more kittens.
Cynthia E. Varnado.

A kitten is so flexible that she is almost double; the hind parts are equivalent to another kitten with which the foreparts play. She does not discover that her tail belongs to her unless you tread on it.
Henry David Thoreau.

Refined and delicate natures understand the cat. Women poets and artists hold it in great esteem, for they recognise the exquisite delicacy of its nervous system; indeed only course natures fail to discern the natural distinctions of the animal.
Champfluery.

I love cats because I love my home and little by little they become its visible soul.
Jean Cocteau.

Cleanliness in the cat world is usually a virtue put above godliness.
Carl Van Wechten.

God made the cat that man might have the pleasure of caressing the tiger.
Ferdinand Mery.

You can’t look at a sleeping cat and be tense.
Jane Pauley.

The idea of calm exists in a sitting cat.
Jules Renard.

If a cat loves you, it’s for real. A cat never pretended to like anyone.
Anne Borris

Never try to outstubborn a cat.
Robert A. Heinlein

Cats know how to obtain food without labour, shelter without confinement, and love without penalties.
W.L. George.

One never adopts a cat. A cat adopts you.
Tom Bennet.

Who can believe that there is no soul behind those luminous eyes!
Theophile Gautier.

With the qualities of cleanliness, discretion, affection, patience, dignity, and courage that cats have, how many of us, I ask you, would be capable of being cats?
Fernand Merv.

In the middle of a world that has always been a bit mad, the cat walks with confidence.
Rosanne Amberson.

A dog is a dog. A cat is a purrson.
Unknown

The cat is a dilettante in fur.
Theophile Gautier.

The real objection to the great majority of cats is their insufferable air of superiority.
P.G.Wodehouse.

Her function is to sit and be admired.
Geogina Strickland Gates.

Cats are rather delicate creatures and they are subject to a good many ailments, but I never heard of one who suffered from insomnia.
Joseph Wood Krutch.

Cats seem to go on the principle that it never does any harm to ask for what you want.
Joseph Wood Krutch.

Honest as the cat when the meat is out of reach.
English Saying

All you have to remember is Rule 1: When in doubt – Wash.
Paul Gallico.

A dog, I have always said, is prose; a cat is a poem.
Jean Burden.

At dinner time he would sit in a corner, concentrating, and suddenly they would say, “Time to feed the cat,” as if it were their own idea.
Lilian Jackson Braun.

Cats always know whether people like or dislike them. They do not always care enough to do anything about it.
Winifred Carriere

Most cats, when they are Out want to be In, and vice versa, and often simultaneously.
Dr Louis J.Camuti.

If he had asked to have the door opened, and was eager to go out, he always went out deliberately. I can see him now, standing on the sill, looking about the sky as if he was thinking whether it were worthwhile to take an umbrella, until he was near to having his tail shut in.
Charles Dudley Warner.

A kitten is chiefly remarkable for rushing about like mad at nothing whatever, and generally stopping before it gets there.
Agnes Repplier.

The cat is the mirror of his human’s mind, personality and attitude, just as the dog mirrors his human’s physical appearance.
Winifred Carriere

Although all cat games have their rules and ritual, these vary with the individual player. The cat, of course, never breaks a rule. If it does not follow precedent, that simply means it has created a new rule and it is up to you to learn it quickly if you want the game to continue.
Sidney Denham

Cats do not go for a walk to go somewhere, but to explore.
Sidney Denham.

I suspect that many an ailurophobe hates cats only because he feels they are better people than he is – more honest, more secure, more loved, more whatever he is not.
Winifred Carriere

If I called her she would pretend not to hear, but would come a few moments later when it could appear that she had thought of doing so first.
Arthur Weigall

It is as easy to hold quicksilver between your finger and thumb as to keep a cat who means to escape.
Andrew Lang.

If a fish is the movement of water embodied, given shape, then a cat is a diagram and pattern of subtle air.
Doris Lessing.

If man could be crossed with the cat, it would improve man but deteriorate the cat.
Mark Twain.

To understand a cat, you must realise that he has his own gifts, his own viewpoint, even his own morality.
Lilian Jackson Braun.

With a dog, you feed him, you give him plenty of affection, you take him for walks and he thinks, “Wow, this guy must be a god.”

With a cat, however, you feed him, you love him and care for him and he thinks, “Wow, I must be a god.”
Brian K Lebowitz

Beware!
Who goes there,
With mast in the air
And green lights showing.
Beware! Beware!

Rules for Cats Who Have a House to Run

Doors: Do not allow closed doors in any room. To get door opened, stand on hind legs and hammer with forepaws. Once door is opened, stand halfway in and out and think about several things. This is particularly important during cold weather, rain, snow or mosquito season. Swinging doors are to be avoided at all costs.

Chairs & Rugs: If you have to throw up, get to a chair quickly. If you cannot manage in time, get to an Oriental rug. If there is no oriental rug, shag is good.

Bathrooms: Always accompany guests to the bathroom. It is not necessary to do anything–just sit and stare.

Hampering: If one of your humans is engaged in some activity and the other human is idle, stay with the busy one. This is called “helping”, otherwise known as “hampering”. Following are the rules for “hampering”,:

When supervising cooking, sit just behind the left heel of the cook. You cannot be seen, and thereby stand a better chance of being stepped on and then picked up and comforted.
For book readers, get in close under the chin, between eyes and book, unless you can lie across the book itself.
For knitting projects or paperwork, lie on the work in the most appropriate manner so as to obscure as much of the work as possible, or at least the most important part. Pretend to doze, but every so often reach out and slap the pencil or knitting needles. The working may try to distract you. Ignore it. Remember that the aim is to hamper the work. Embroidery and needlework projects make great hammocks, in spite of what humans may tell you.
For humans paying bills (monthly activity) or working on income taxes or Christmas cards (annual activity) keep in mind the aim–to hamper! First sit on the paper being worked on. When removed, watch sadly from the side of the table. When activity proceeds nicely, roll around on the papers, scattering them to the best of your ability. After being removed for the second time, push pens, pencils, and erasers off the table, one at a time.
When a human is holding a newspaper in front of him/her be sure to pounce on the back of the paper. They love to jump.

Walking: As often as possible, dart quickly and as close as possible in front of the human, especially on stairs, when they have something in their arms, in the dark, and when they first get up in the morning. This will help their coordination skills.

Bedtime: Always sleep ON the human at night so s/he can’t move around.

7. If there’s more than one, ALL of them are mine.

8. If you have something and you put it down, it automatically becomes mine.

9. If it’s mine, it must NEVER appear to be yours in any way. 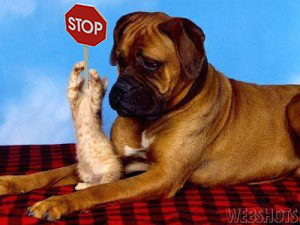 Become a member of STOP: